Fashionable shoes are seldom sensible. However, some trends are better for feet than others. While some might assume the current look of wearing trainers with thick, chunky soles would be good for your feet – think of all that extra cushioning – leading podiatrists say otherwise.

Part of the popularity of these shoes might have come from the fact they are much more comfortable than other fashion shoes for women, particularly high heels. However, they come with their own risks. In particular, the weight of the trainers is an issue that could lead to health problems down the line.

Talking to the Guardian, William Joyce – podiatrist at London’s City Chiropody and Podiatry – explained: “Thick-soled trainers are heavier. This can give rise to pain up the front of the lower leg, known as shin splints. This is because the extra weight can increase the demand on the muscles on the front of the shin.” 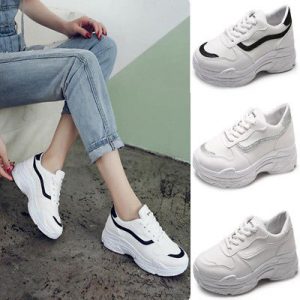 Some shoes are worse for this than others. Some of the heaviest available on the market are the Superga 2790 Linea Up Down, which weigh in at 481g, and the Reebok Triple Platform X Gigi Hadid trainers at 557g.

Furthermore, while trainers designed specifically for exercise usually provide plenty of support to the arch of the foot, fashion trainers often do not. Despite all this, the current trend for chunky trainers is still preferable – from a podiatry standpoint – to wearing high heels, as these can be even worse for feet.

Andrew Gladstone, one of City Chiropody and Podiatry’s directors, told the Guardian: “High heels are generally worse than thick-soled trainers. Tight, narrow toe areas lead to corn formation, increased pressure on toes and joints, toenail problems, while thin, hard, leather-soled shoes can cause problems with the ball of the foot.”