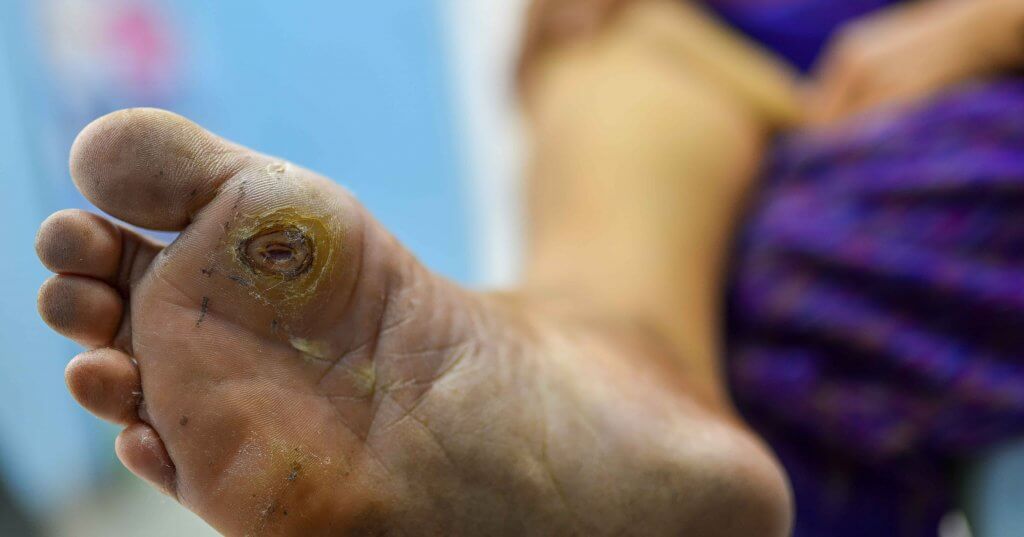 The prevalence of diabetes is on the rise worldwide. As podiatrists and diabetic foot experts, we know the deleterious effects of diabetes on the tissues of the lower extremity. Among diabetes-related complications, the treatment and management of diabetic foot ulcers (DFUs) remains major challenges for patients, caregivers and health-care systems alike. Multiple disrupted physiologic processes, including decreases in cellular signaling and growth factor responsiveness, lead to microvascular dysfunction and diminished peripheral blood flow that can contribute to the lack of healing in people with DFUs.

Successful translation of novel therapeutic modalities into clinical algorithms for DFU management may fulfill an unmet need that is of increasing importance given the global diabetes epidemic. There is an abundance of clinical evidence that remote ischemic conditioning is cardioprotective but can it provide the same protection to the microvascular circulation of patients with diabetes, and accordingly help increase healing rates in patients with DFUs?

Researchers initially studied remote ischemic conditioning (RIC) as a potential protective strategy for cardiac function. In 1986, Murry and colleagues discovered that short repetitive bouts of occlusion and reperfusion of a coronary artery in dogs subsequently protected the heart against a myocardial infarction.1 In 1993, Przyklenk and team conducted a study that is considered the first evidence for the remote application of tissue conditioning.2 This study showed that brief controlled periods of occlusion and reperfusion of a canine coronary artery also protected remote cardiac tissue not directly supplied by this artery when subjected to a subsequent sustained ischemic episode.

Drawing upon on this data, researchers began investigating whether remote ischemic conditioning provided analogous benefits to patients with tissue ischemia injuries. Subsequent clinical studies in human models have concluded that remote ischemic conditioning is safe, well-tolerated and produces a systemic phenomenon that has beneficial effects in other organs such as lung, liver, kidney, intestines and the brain as well as skeletal muscle tissues.3,4

What The Research Reveals About Endothelial Dysfunction, Microvascular Disease And Remote Ischemic Conditioning

While the prevailing thinking is that the etiology of diabetic microvascular disease is multifactorial, a consistent finding in patients with diabetes is endothelial dysfunction.5 There is a known correlation between the long-term effects of elevated glucose levels and the alteration of endothelial cell function.5 An impairment in the formation of vasodilators such as nitric oxide along with increases in the formation of several vasoconstrictors speed the progression of microvascular disease.6 It is generally accepted that hyperglycemia resulting from uncontrolled diabetes leads to an impairment of nitric oxide production and activity.6,7 Prolonged elevated glucose levels generate oxidants in smooth muscle that may diminish nitric oxide signaling, decreasing the responsiveness of endothelium-dependent vasodilation, especially in the microcirculation.6,7 The effects of this cascade of events are decreased functional perfusion and tissue hypoxia in the lower extremity, particularly the feet, complicating DFU healing.

There is scientific evidence indicating that one effect of remote ischemic conditioning is an increase in nitric oxide production.7 One hypothesis is that the repetitive inflation and deflation of a blood pressure cuff has a shearing effect on the vasculature that results in the release of nitric oxide.7 Researchers have suggested that remote ischemic conditioning may contribute to improved endothelial function, resulting in enhanced vascular performance.7 Reversal of tissue hypoxia and increases in peripheral circulation could potentially improve wound healing, especially in patients who are not candidates for other vascular interventions.

In a 2014 double-blind, prospective, randomized study involving 40 patients with aseptic and infected DFUs, Shaked and colleagues assessed the efficacy of remote ischemic conditioning as an adjunct to standard of care treatment.9 Applying blood pressure cuffs to both arms of all the patients, researchers inflated and deflated the cuffs for three five-minute cycles. The study group had their cuffs inflated to 200 mmHg while the control group had their cuffs inflated to 10 mmHg. The patients in the study group had remote ischemic conditioning treatments every two weeks and were followed for a total of six weeks. For the patients who completed the study, nine out of 22 patients (41 percent) in the treatment arm achieved complete wound healing in comparison to zero out of 12 patients in the control group.

Could Remote Ischemic Conditioning Have An Impact In Limb Salvage Protocols?

Most clinical remote ischemic conditioning treatment studies use a standard blood pressure cuff or similar device applied to the upper or lower extremity to produce the cycles of non-lethal ischemia. Treatment typically consists of three or four cycles that medical personnel can administer over approximately 40 minutes by inflating and deflating the blood pressure cuff every five minutes. Clinicians reportedly achieve the greatest effects with treatments every 72 hours or two to three times a week.10

The occlusion pressure needs to be at least 25 mm above the patient’s systolic pressure, which averages 125 mmHg but can be much higher.10 Therefore, medical personnel need to determine the patient’s systolic pressure first and monitor it throughout treatment. One option is to go arbitrarily high on all patients but even a set pressure of 200 mm leaves nine percent of patients with DFUs uncovered and is very uncomfortable for all patients, potentially reducing compliance.10 Thus, integrating such treatments into regular clinical practice would be costly in time and medical staff resources as well as patient satisfaction.

An emerging modality, the HomeCuff Wound Therapy device (LifeCuff Technologies), is reportedly showing promise in early studies.11 According to the company, this automated remote ischemic conditioning device is specifically designed for home use with easy application to the arm by the patient or a caregiver. The modality operates through a single push-button, which is pre-programmed to deliver an automated 40-minute treatment cycle without the need for medical personnel, thus reducing the cost of treatment. Unlike standard blood pressure cuffs that can only apply a single set pressure, the HomeCuff Wound Therapy device applies variable occlusive pressure based on intermittent readings of extremity blood pressure from software within the cuff.10,11 This facilitates the delivery of remote ischemic conditioning at the most effective yet comfortable level.10,11

The device has a built-in electronic monitoring system that collects and transmits adherence to treatment regimen data and vital sign values to a secure and HIPAA-compliant database. Early case studies showed promising results with the use of the HomeCuff Wound Therapy device two to three times weekly to treat patients with DFUs.10

Dr. Cole is the Medical Director of the Wound Care Center at University Hospitals Ahuja Medical Center in Beachwood, Ohio. She is also an Adjunct Professor and Director of Wound Care Research at the Kent State University School of Podiatric Medicine.